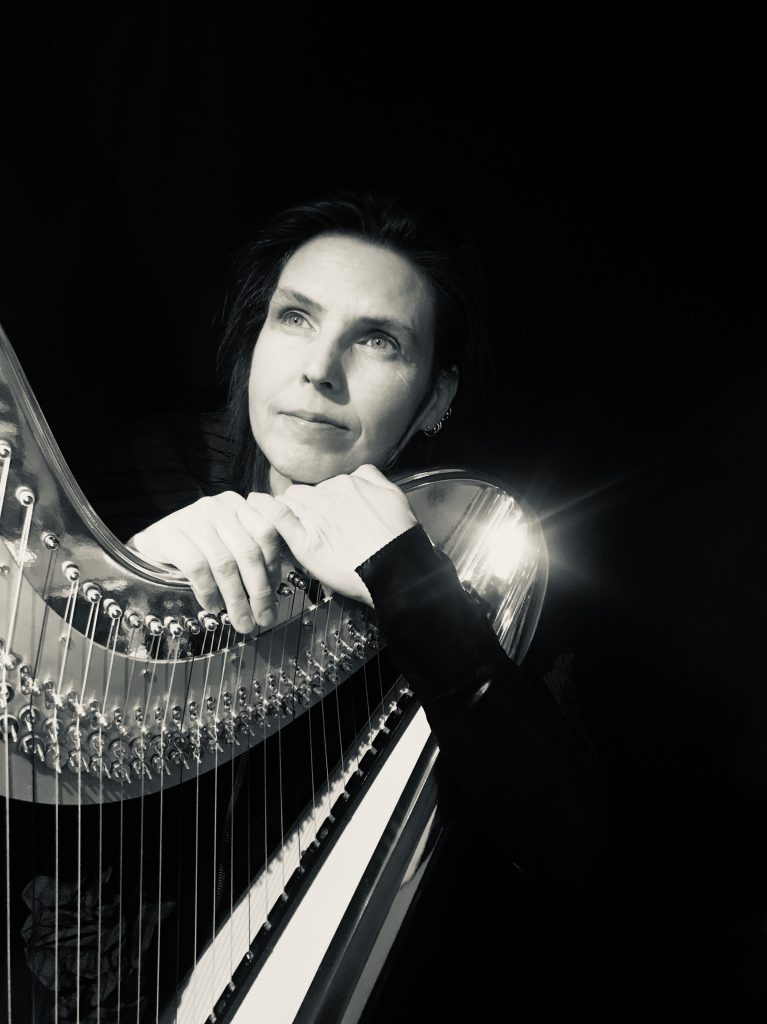 Caroline Lizotte is internationally reknown as a brilliant French-Canadian harpist and composer. Her works for harp are celebrated and performed around the world, in festivals and international competitions for harp, and they are listed among the most influential works of the harp repertoire in late 20th and 21st century. In June 2019, Caroline Lizotte premiered her most recent work in Quebec and Paris : “Stellar Sonata” opus 51 for electroacoustic harp, which has been supported by the Conseil des Arts et Lettres du Québec.

Caroline is currently working on her next album – a compilation of her outstanding works for solo harp, played by the composer. During the year 2021, she will be among the guest artists at the Dutch Harp Festival in Utrecht, The Netherlands, as well as the World Harp Congress in Cardiff, Wales, United Kingdom.

An Associate Composer of the Canadian Music Center, Caroline Lizotte has been performed in Canada, the United States, France, Belgium, the United Kingdom, the Netherlands, Italy, Switzerland, Germany, Austria, Hungary, Ireland, Finland, Sweden, Norway, Mexico, Colombia, New Zealand, Thailand, Taiwan and Japan. She began composing at a young age and has a large catalog of works, original transcriptions and arrangements for various formations.

In 1999, Caroline founded les éditions Calyane, a musical publishing micro-enterprise, through which she produces and distributes her works with a personalized touch. There are also points of sale at the most important international harp makers, notably Salvi Harps, Lyon & Healy Harps and Les Harpes Camac.

Many of her works are from commissions:

“Close for Couloir” opus 48 for harp and cello (2013), commissioned by the Duo Couloir/Heidi Krutzen and Ariel Barnes (supported by the Canada Council for the Arts)

“La Madone” opus 43 for solo harp (2009), commissioned by Valérie Milot, is among the required repertoire for the American Harp Society’s Anne Adams Award in 2020

Mrs. Lizotte is regularly invited to give master classes and perform concerts of her works in Canada and abroad, such as an artist in residence at the Glenn Gould Studio in Toronto and the Eastman School of Music Rochester, New York.

To date, Caroline has led a solid career as a soloist, chamber and orchestral musician over the last 25 years. She is the second harp with the Orchestre Symphonique de Montréal since 2003, and served as principal harpist with the Orchestre Symphonique de Trois-Rivières from 1995 to 2015. She has worked, recorded and toured with several ensembles and orchestras of Eastern Canada, and she often figures in the credits for classical and popular recordings and movie soundtracks. She is a co-founding member of the Four Seasons Harp Quartet with harpists Jennifer Swartz, Lori Gemmell and Caroline Léonardelli, with whom she performs in the majors chamber music festivals in Canada since its formation in 2004.

Caroline Lizotte is the professor of harp of the Université de Montréal’s Music Faculty since 2010. She joined the Canada National Youth Orchestra’s Faculty in 2016 and the Orford Music Academy in 2017. She was also the professor of harp at the Conservatoire de Musique de Trois-Rivières from 2003 to 2010.

Born in Québec City, she graduated from the Conservatoire de Musique de Québec in 1992 and studied at the Eastman School of Music, Rochester NY.